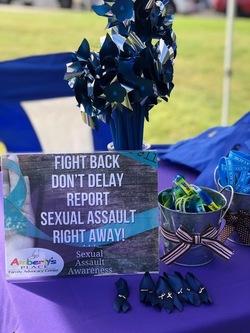 While abuse numbers are down overall, Amberly’s Place has seen a significant increase in domestic violence and child abuse cases in the last few months.

Additionally, the child abuse cases are much more severe in terms of the level of injuries. 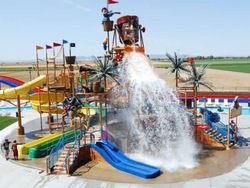 Ten “lucky” people will soon be taking themselves and their families or guests on fun getaways after winning vacation packages in the Week in Paradise fundraiser.

The family advocacy center uses the funds raised from the drawing to help Yuma County abuse victims with emergency needs. This year the agency had hoped to sell 5,000 tickets but fell just short of the goal. It sold 4,900 tickets, raising $49,000.

The drawing was held Friday at Z Fun Factory and streamed live on Facebook. Foothills Rotary Club member Blade Anthony won the Week in Paradise top prize, a seven-day, six-night trip to Oahu, Hawaii, for two with hotel and airfare included, $300 travel money sponsored by Brian Butcher of Edward Jones and hairstyles for two by The Sassy Seale Hair Salon

May
23
2021
Umphress retires after two decades of service to abuse victims. 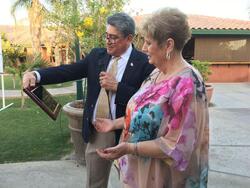 South County Justice Court Judge Juan Guerrero presents a plaque of appreciation to Diane Umphress for her 20 years of service as the executive director of Amberly’s Place. The agency bid her farewell at a retirement party May 14, where colleagues, supporters and community members feted her. Councilwoman Karen Watts and State Rep. Tim Dunn also thanked Umphress for her many years of service. Umphress officially retired May 15 and handed the torch over to Tori Bourguignon.

The Amberly’s Place Board of Directors has hired Tori Bourguignon as the new executive director to replace Diane Umphress, who will be retiring in May. Umphress has served as the agency’s executive director since its founding in 1999.

Bourguignon was hired after a national search. After interviewing several candidates, the board said it “found the perfect candidate here in our own community.” Bourguignon will start May 1.

Bourguignon is a native of Yuma, graduate of Yuma High and worked as the crisis response coordinator at Amberly’s Place for nine years. Bourguignon left Amberly’s Place six years ago to pursue other interests “and is very excited to be back,” the agency said.

Bourguignon has been trained in crisis coordination and management as well as being a former school counselor for Yuma Union High School. Her background and passion for Amberly’s Place mission will ensure the organization continues to move forward, the agency noted.

Umphress said she feels confident in turning the keys of the agency over to Bourguignon.

Amberly’s Place has the resources to offer meals to victims of domestic violence through summer’s end, thanks to students at Sunrise Elementary School.

Upon Yuma School District One’s return to in-person instruction in early March, the school’s eight-member student council – comprised of third, fourth and fifth graders – spearheaded a canned food drive for the local family advocacy center because “they wanted to give back.”

Founding member and longtime Amberly’s Place Executive Director Diane Umphress announced her retirement from the organization that has been a voice and a beacon of hope for abuse victims for more than 20 years. Umphress will retire on May 15.

Amberly’s Place, a family advocacy center, has helped thousands of victims on their journey from victim to survivor to thriver. Umphress has passionately carried the torch for victim rights throughout Yuma County and Arizona for more than two decades.

Her work started with the Yuma County Attorney’s Office as a victim advocate and evolved as a leader among her peers. She was instrumental in planting the seeds that led to the creation of the Yuma County Family Advocacy Coalition which eventually founded Amberly’s Place.

Umphress worked diligently to encourage the creation of best practice protocols for child abuse and sexual assault investigations in Yuma County. Working with local law enforcement agencies and with the training they provided for victim advocates, these protocols led the way for Amberly’s Place to be the first agency to offer on-scene crisis response. This has led to great improvements in how victims of these crimes are treated and assisted.

Amberly’s Place awarded vacation packages to a few fortunate families during a virtual drawing of the Week in Paradise fundraiser held on Friday. This is the biggest fundraiser of the year for the family advocacy center, which assists abuse victims in Yuma County and part of Imperial County.

Donations to Amberly’s Place have been down due to the COVID-19 pandemic. In addition, the Thrift Shoppe closed for an extended time, which further hurt the emergency fund. The agency hopes to recoup some of the lost donations through the Week in Paradise fundraiser.

• Thumbs up to those who have purchased tickets to support Amberly’s Place and its annual Week in Paradise fundraiser. The drawing is tonight at 6 p.m. – if you haven’t yet purchased a ticket, visit www.AmberlysPlace.com

The number of reported abuse cases are down 45% overall from this time last year, and Amberly’s Place agency is providing services to more adults than children.

“This pattern is really worrisome as it is not in keeping with what we have seen over the last 20 years,” said Diane Umphress, executive director of the family advocacy center, which assists abuse victims in Yuma County and part of Imperial County.

7-day/6-night trip to Oahu, Hawaii, for 2 with hotel and airfare included, valid until December 2021; $300 travel money sponsored by Brian Butcher of Edward Jones; and hairstyles for 2 by The Sassy Seale Hair Salon.