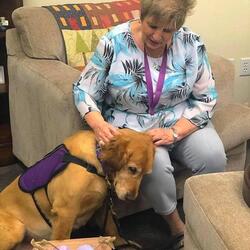 Amberly’s Place lost a critical and beloved member of the family on March 30. Goldie Love, a certified therapy dog, died at the age of 10. The golden retriever was almost 11 when she “passed over the rainbow bridge.”

Goldie joined the family advocacy center in 2013. She was certified and trained to work with victims. She brought comfort to countless victims, young and old, in Yuma County.

She would lay her head on the laps of victims who had experienced a loss. Children who were scared needed her the most.

“She comforted them and made them feel safe,” recalled Diane Umphress, executive director. “We had one child who had been severely abused and was very angry. This child would not let anyone come near them and was yelling and screaming from the moment they came in.”

Goldie was finally allowed to go in. Staff was afraid the child would hurt Goldie. But Goldie walked into the room with her tail wagging, went right up to the child and touched her mouth to the child’s hand, inviting the child to pet her. The child sat down, pet Goldie and talked to her. When the child left, the child said that the only good thing about the agency was the dog.

Goldie was a rescue dog. She didn’t have the best start in life, but she had the best ending. “This was a pound puppy who had been used as a breeder dog for someone. Her beginning life was not a happy one. However, once she came to Amberly’s she was loved,” Umphress said.

“Monday’s were her favorite days. She would run in the door and go to each office and greet staff. Then she would come back to her bed.”

Amberly’s Place knew that with the announcement of Umphress’ retirement, Goldie would also be retiring, but no one foresaw her passing. She started having problems walking, so Umphress took her to the vet, where they discovered cancerous masses in her lungs. She came to work each day for the next 10 days just to see staff.

On Goldie’s last day at the center, staff laid next to her and talked to her. “Everyone had a chance to spend time with her, and she loved every minute of it,” Umphress said. “She was sent off with love, laughter and tears. There will never be another Goldie.”

The center announced Goldie’s passing on social media. “To say she will be missed would be an understatement. We love you, Goldie, be at peace, be free of pain, until we meet again.”

Umphress thanked the Humane Society of Yuma for providing the “amazing animal” and the training and Fort Yuma Rotary Club for sponsoring Goldie from the beginning. She also thanked the second graders at Alice Byrne School for giving Goldie Love her name.

“They named her Goldie Love as her color was gold and love is what she would give,” Umphress said.

PINWHEELS FOR A CAUSE

Goldie dedicated her life to helping abuse victims and had a soft heart for kids. Amberly’s Place will continue her mission with Pinwheels for a Cause, a community event for kids, this Saturday.

The event celebrates children during April, National Child Abuse Prevention Month. Kids will get goodie bags and have a chance to take part in many activities and play on jumpers as well as enjoy music and food. 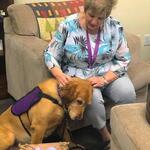 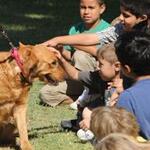 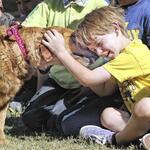