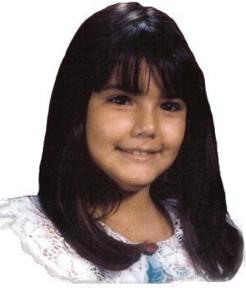 With permission of her family, Amberly's Place honors the memory of Amberly Ann Mendoza, a child victim of an unsolved homicide in Yuma.

Amberly Mendoza was a 9 year old child who was sexually assaulted and murdered in March of 1996. Lying asleep, with the window partly open for fresh air, Amberly was attacked when someone came through the bedroom window. Amberly's mother went to wake her up the next day for breakfast, only to find her daughter had been the victim of a horrible crime. She immediately called 911 and police were dispatched.

Sadly, there was not a crisis response advocacy team as we now have at Amberly's Place. The family had to deal with the additional stress of the investigation on their own, without help. No one was there to guide them and advise them of their victim rights. Four years after Amberly was murdered, her mother was approached about using her name for the center.