With Thanksgiving Day on Thursday, Amberly’s Place invites community members to “adopt” local families who have experienced abuse. Their donations will help the family advocacy center provide holiday meal baskets to those families who would otherwise not have a Thanksgiving Day.

Diane Umphress, executive director of Amberly’s Place, pointed out that often victims not only leave behind the abuse, but they also lose their source of financial support. As a result, this holiday season, “many families will be left without any type of financial support at all due to abuse,” she said. “As a community, we continue to need your help and support to keep up with the needs of those we serve.” 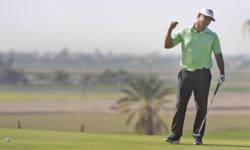 A large part of the tournaments success is due to the sponsorship from Genesis of Yuma. The new car dealership helped in a variety of ways to help Desert Hills create a wonderful event.

“(Genesis) was really excited to get on board and partner with the Sunbelt Senior Tour,” Smith said. “They provided signage and support for us. We think they’re going to continue on next year.”

Along with the spectacular golf that was played over the three days, this golf tournament displayed even further commitment towards their effort in helping the Yuma community.

Amberly’s Place in Yuma was the charity partner with the Sunbelt Senior Tour this week.

The social service organization houses professionals who are trained in handling victims of child abuse, domestic violence, sexual assault and elder abuse. The special training helps reduce the trauma to the victim.

“Amberly’s Place is unfortunately a needed entity in our community and other communities,” Smith said. “We were able to raise $1,385 for Amberly’s place. That charity isn’t just a charity, it’s a lifeblood. It saves peoples lives. We’re pleased to have had them as our partner.”

Desert Hills will be having another partnership with Amberly’s Place during its “Million Dollar Shootout” tournament right after Christmas.

SAN LUIS, Ariz. – The number of reported domestic violence cases here is lower than it was two years ago.

Does that mean efforts to fight violence in the home is starting to work, or is it that victims don't always report the abuse?

Either way, police and community leaders in south Yuma County say too many cases of domestic violence still go unreported.

Last month Amberly’s Place had 255 abuse victims reach out for help in August, a 42 percent increase from last year. Domestic violence always creates the most victims in Yuma County.

In August, the center helped 62 primary victims of domestic violence, those who were assaulted, and 47 secondary victims, usually children who witness this crime.

Statistically, 1 in 3 women and 1 in 4 men will be victims of domestic violence. On average 20 people every minute are physically abused by an intimate partner in the U.S., according to National Coalition Against Domestic Violence statistics. Across the U.S. on a typical day more than 20,000 calls are placed to domestic violence hotlines.

Amberly’s Place crisis advocates only respond to the scene of the more serious cases of domestic violence; sometimes they are attempted homicides or homicides.

Children are exposed to domestic violence every day, Diane Umphress, executive director, noted. “When you look at our stats, look at the number of those under 18 served and impacted by abuse -- 118 last month. These children have a higher chance of dropping out of school, getting involved in drugs and lacking the coping skills needed to succeed.”

And the winner is …

Amberly’s Place held the drawing for Week in Paradise, its biggest fundraiser of the year, on Thursday at Harkins Theatres, before a screening of the movie “Incredibles 2.” 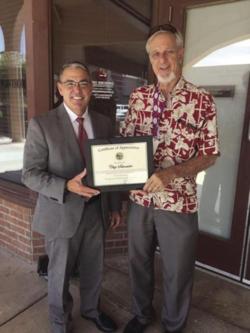 “Chip has done this job for over 11 years because of his desire to see children succeed. He realizes it takes more than the parents in today’s world. His mandated reporter presentations has been the starting point for many children going to law enforcement for help. I am thankful to have worked with this man and he will be greatly missed,” said Diane Umphress, executive director of Amberly’s Place, an advocacy center for abuse victims.

Back in 1990, the federal government released money for the Children’s Justice Project, which was designed to get law enforcement, county attorneys and child protective services as well as advocates into the schools and daycares to talk about mandated child abuse reporting to teachers and other people required by law to report child abuse.